Many people dream of living by the coast: a weekend retreat, a holiday bolthole or, for the lucky few, a permanent home.

Cornwall’s spectacular coastline tapers out into the Atlantic ocean in robust defiance of the elements; dramatic cliffs, picture postcard harbours and fishing towns, and deserted moorland all combine to create a landscape that is as unique as it is dramatic. With a rich cultural history it comes as no surprise that the county has provided many a location and inspiration for film and television, including Jamaica Inn, multiple versions of Treasure Island, Poldark and Fisherman’s Friends, to name but a few.

The Courtyard at Duporth is a collection of new homes by Acorn Property Group set in an exceptional location, with its prime coastal position and a fascinating history that connects it to the Queen’s grocers, Fortnum and Mason. The history of The Courtyard is intertwined with one of Cornwall’s most prominent historical families, the Rashleighs – powerful merchants from the time of Henry VIII and Elizabeth I. Throughout the family’s lineage there are numerous notable descendants of Philip Rashleigh, who started the family’s rise to prominence through trade and the purchase of land from the King. His grandson Jonathan Rashleigh completed the construction of Menabilly, the family seat and house that inspired Manderley, in Daphne du Maurier’s book, Rebecca. While it was Charles Rashleigh (1747-1823) who put Duporth on the map, building the Duporth Manor Estate, the site on which The Courtyard is located, and who instigated the building of a new local port at West Polmear, renamed ‘Charlestown’ in 1799, in his honour.

Located within walking distance of The Courtyard, Charlestown harbour, purchased by Square Sail in 1994, is now used as a location for various productions including the 2015 Poldark TV series. Boasting a range of cafés, pubs and restaurants, Charlestown attracts many visitors.

Duporth Manor transferred to George Freeth, Rashleigh’s solicitor, sometime during the 1840s, and it was under the ownership of the Freeths that Duporth Manor Farm was added to the estate, between 1839 and 1882, with the clocktower added around 1882. Both have provided architectural and design inspiration for The Courtyard.

Duporth Manor was sold to Seaside Holiday Camps in 1933, who converted the estate into a then-fashionable holiday camp, Duporth Holiday Village. Over the next 55 years Duporth Holiday Village found itself owned by some very well-known names including Butlins, Haven and Warner. The main manor house was demolished in 1989 after it became uneconomical to repair, but the holiday village remained open until 2006.

Situated above a secluded beach overlooking St Austell Bay, award-winning housebuilders Acorn Blue, part of Acorn Property Group, saw the potential of the location and were determined that it be realised.

As part of the works the clock and tower underwent full restoration, which revealed the name of the original clock manufacturer, John Thwaites of Clerkenwell London: a brand name of Thwaites and Reed, who are the oldest clock manufacturing company in the world, dating back to 1610. They have been responsible for some very famous clocks around the world, including the clock at Horse Guards Parade (1755) and the striking clock at Fortnum & Mason, Piccadilly, London (1964).

Embarking on a new chapter, the former holiday park is now home to The Courtyard, a unique collection of two- and three-bedroom homes, arranged around a landscaped courtyard, at the centre of which is the fully restored and working John Thwaites clock, in its refurbished Grade II listed tower.

Taking their lead from the retained original Duporth Manor Farm buildings, which have been restored and converted into houses and bungalows in The Farm House and The Stables, the new sections of The Courtyard – The Mews, Pavilion Rise, Apartments and Bay View Houses – all take their architectural cues from the original buildings and traditional Cornish design. Each has a distinct but complementary design, successfully combining contemporary and traditional styles.

All homes at The Courtyard come with private outside space, as either a balcony or terrace/garden and are finished to a high standard, with fitted kitchens that include a range of Neff and Bosch built-in appliances, LED lighting, partial underfloor heating, Karndean flooring, and a fibre optic internet connection.

A short walk from the beach – accessed by a private woodland – and less than a mile from Charlestown – a UNESCO World Heritage Site – The Courtyard enjoys southerly and sea views, with each home having been thoughtfully laid out and designed. To the east, Fowey and Liskeard are approximately 35 minutes’ drive away and to the west, Truro is only 30.

In all there will be 38 homes at The Courtyard – apartments, houses and bungalows, which are part of the Acorn Property Group’s Lifetime Living Collection, exclusively for the over 55s. Prices range from £310,000 to £750,000. If you’d like to see it in person, the Show Home is open daily, 10am to 5pm. 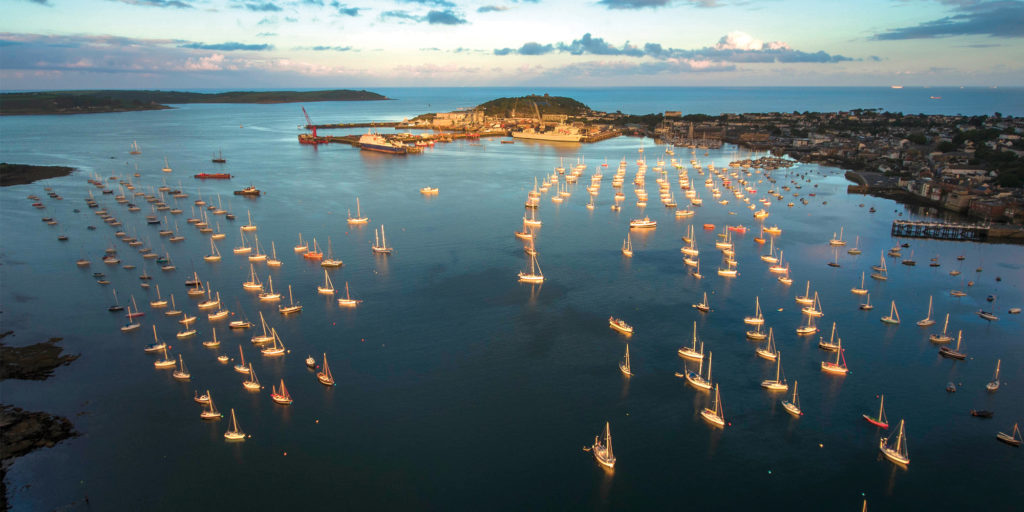 Whether a foodie, keen sailor, avid music fan or simply one to let your hair down, there’s a festival happening in Cornwall this summer that’s just for you.